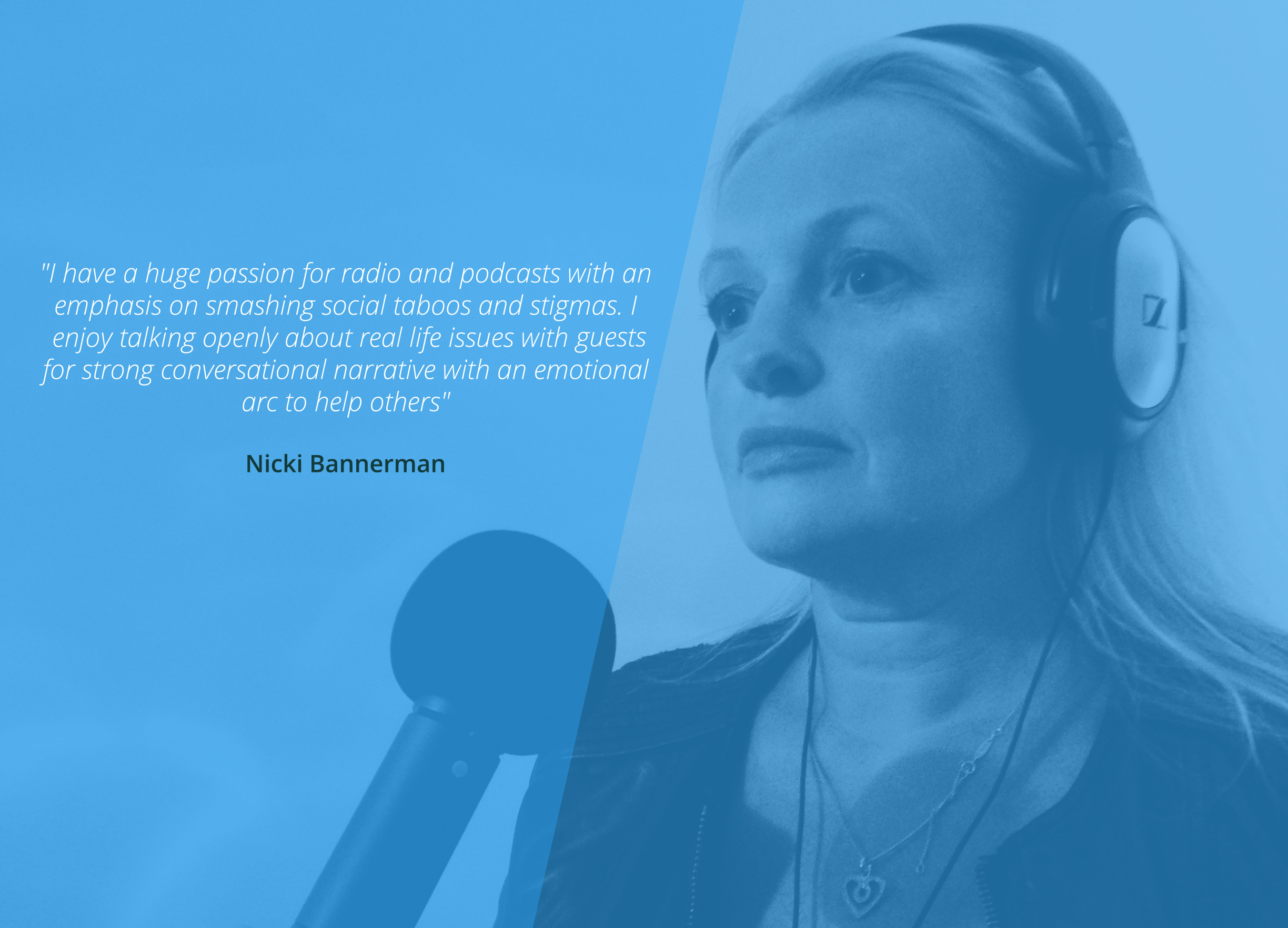 “Nicki’s friendly approachable style is a joy to listen to!”
Jane Garvey

“Nicki has been an important part of the Sound Women podcast team. She’s extremely enthusiastic and has contributed lots of ideas over the last 12 months. Her on air contribution has also been significant. She has a great voice and tone, her genuine interest in people has been apparent in all the interviews she has conducted for Sound Women”
Nan Davies

Nicki has turned her passion and hobby for radio and storytelling into a new career in
RADIO PRESENTING, PRODUCING AND PODCASTING

Her background in radio and audio…

Representing the broadcast charity Sound Women, Nicki has been a presenter and producer on the team for the monthly podcasts. She has presented or contributed interviews for the year’s episodes since relaunch in 2015, following in the footsteps of the successful iTunes podcaster Helen Zaltzman.

Key interviews have included presenter Lauren Laverne from The Pool and late night woman’s hour for a 40 minute long feature length podcast on ‘Brands and Audio’, and Helen Boaden, former Director of BBC Radio as a contributing interview on the mentoring women programme. For the finale podcast interviews included Jane Garvey from BBC4 Woman’s Hour and Chris Burns, Chair of Sound Women, the Radio Academy and Director at BBC Radio.

Nicki chaired and presented a panel interview at Virgin Radio and sourced guest interviews and studio with Edith Bowman from Virgin, A.Dot from BBC1Xtra and Charlie Hedges from Kiss FM for an hour’s podcast on Breakfast Champions. For the sports podcast Be A Good Sport Nicki was the lead producer and presenter interviewing Gigi Salmon on location at Chelsea TV, Jacqui Oatley (MBE) at the ITV Studios, and producer Jo Tongue and presenter Caroline Barker for a Sports radio broadcasting feature programme.

Nicki also features regularly as a producer and presenter of 30 minute podcasts on internet London women’s radio station Radio Gorgeous for irreverent conversation. Celebrity interviews have include Ruby Wax on mental health, Carol Smillie on her new underwear business, Sue Moxley, on beauty, health and wellbeing and Jodi Ellen Malpas about her new racy novel ‘The Protector’ (since going straight to the top of the New York Times best sellers!).

A recent charity interview was held with novelist, authoress and actress Helen Lederer as Ambassador of Basic Needs on mental health and for the broadcast industry on comedy for the launch of the Absolutely Fabulous movie. Nicki also helped Helen Lederer with marketing and development of her CWIP concept (Comedy women in Print).

Nicki has been commissioned to direct and produce programmes on behalf of brands, media companies and charities and is currently working directly with high profile personalities on various innovative campaigns and podcast launches.

In 2015, Nicki represented the Soundcheque and Royal National Institute of Blind People (RNIB) with a music fundraising event ‘SIGHT FOR SOUND’ at the Tabernacle in Notting Hill and launched a pop-up radio station with podcast radio interviews. Guests included sourcing and interviewing Markus Feehily from Westlife and interviewing performers Paul Potts from Britain’s Got Talent of ‘Nessun Dorma’ fame and Denise Leigh opera performer from the 2012 London Paralympic Opening Ceremony. The interviews appeared on RNIB’s Insight Radio podcast, You Tube and Soundcheque’s music synch rights website and social media channels.

As an affiliate member of the Radio Academy Nicki is currently the only woman on the East Anglian Steering Committee.

Nicki records scripts directly in the recording studios on Adobe Audition or Cool Edit Pro and books guests, writes her own features and events, scripts and programmes. Recently she has directed, produced and presented podcasts on behalf of brands as a one-stop shop . She has her own portable recording kit for interviews and works within an industry members Club in London for most of her interviews and trained as a mentor for international graduating students with the University of the Arts London.

She completed a radio presenters course with the community radio station for music and ads including backing up to the hour for making weekend radio shows. She has presented at Suffolk College media department on marketing and attended interview training, tech training, production and radio drama and documentary (and anthropology) training courses. Courses have been attended with Rigtrain, Creative Skillset, Whistledown, BBC Broadcasting House, City and UAL Universities, Sound Women and industry events including Tech Train. She has regularly attended Radio Festivals in London and Manchester. She is a member of the Royal Television Society, Sound Women and the regional committee for the Radio Academy.

She is currently learning editing skills and to drive the desk and works with radio stations, podcasters, producers and executive producers of original content companies, broadcasting students, engineers and technical operators to create successful podcasts and programmes enjoying working as a team.

Her marketing, PR and journalism experience provides the expertise for brand awareness, marketing support and audio production skills for radio and audio to enable brands to talk directly to their customers with bespoke original online content and tailored audio programmes.

Her passion for storytelling and positive good news stories is what drives her including inspirational stories and giving women (or indeed men) a voice and helping their cause.